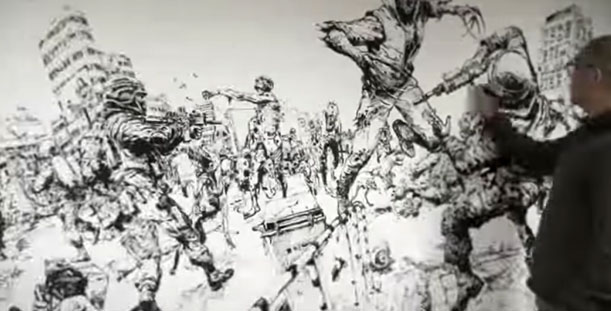 In on of my early bands we recruited a young singer off of a music ad. He was super young…I think at the time he wasn’t even old enough to play in some of the clubs we had booked because he was under-age to be anywhere near the bars. So we sometimes had to arrange with the venue to get-in and get-out without hanging around so nobody got in trouble.

Anyway, this kid had another amazing talent…I remember sitting over his shoulder sometimes watching him sketch in his notepad and amazing artwork would spring out of nowhere. Fantastical monsters and figures…some so amazing I was considering asking him to pen me something I might use as a tattoo someday. No pencils, no guides…it was like somehow these individuals could see a photograph in front of them and just trace.

I can draw a little. Or more accurately, other people thought I could draw and I just played along. But my ability extends more to just practice, patience & sometimes blind luck rather than just any kind of supernatural ability. Nothing like the way I saw in this kid the way he drew and I was both impressed and jealous at the same time.

I recalled this kid because today I saw a viral video on Facebook illustrating another Korean artist Kim Jung Gi who similarly amazed me with the same type of ability.

Tell me that isn’t jaw dropping? There’s more of his work along with other amazingly talented South Korean artists at Superani.com (too bad I can’t read any of the Korean)